Yoko Ono: mended cups, an illy Art Collection, consists of six cups that bear gold, ‘shattered’ and ‘mended’ crack lines – accompanied by six individual saucers that state, in Yoko Ono’s handwriting, six catastrophic events that have affected the world; some have directly affected her life, and others only indirectly, yet bringing death to millions of people. Each saucer states the date and place of the tragic event and concludes with the words “… mended in 2015.”. 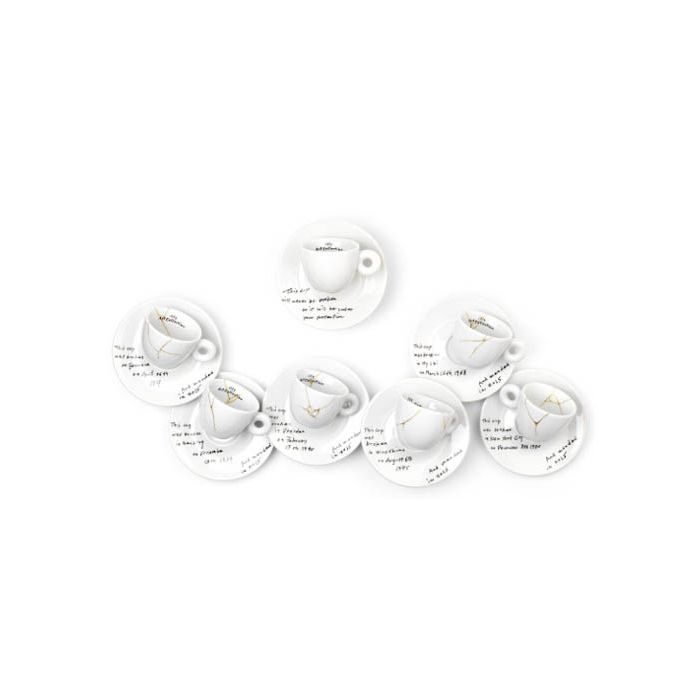 but even after the water’s gone
we’ll probably point out to the containers
and say, “that’s me there, that one.”
we’re container minders

Yoko Ono, from Some Notes on the Lisson Gallery Show, London, 1967).

Take off
Your pants
Before
You fight.
Make this the rule.


Yoko Ono, from DO IT YOURSELF FLUXFEST PRESENTS YOKO ONO & DANCE CO., first published in 3 NEWSPAPER EVENTS FOR THE PRICE OF $1 (FLUXUS NEWSPAPER NO.7, February 1966).

When I was 5 years old, my mother always
told me that happiness was the key to life.
When I went to school, they asked me what
I wanted to be when I grew up.
I wrote down ‘happy’. They told me I didn’t
understand the assignment, and I told them
they didn’t understand life.

Remains “When I was five years old…” by John Lennon